April was a funny month. Much was expected, but not as much as the unexpected that we got.

Dee and I flew back to home soil at the end of March for my usual hospital visit and a much delayed visit from our beloved friend Reen (Van Reen, we like to call her that due to her artistic side) from the land of the Union Jack and Fish & Chips. We were excited as the visit had been planned a few times but had to be put off due to unexpected events that took place either for us or Reen. Anyway, this time round she was visiting Sri Lanka and had already gone nuts about the Elephants long before she even knew when she would arrive.

After we arrived during the last days of March and got a few matters attended too at home, our good friend Van Reen arrived at the crack of the month of April and we were all set to cruse around, to as many places as possible so that she would get a real feel of the Island. Since this was her first visit to Asia, and as far as she had traveled from the Union Jack, we were a bit anxious if she would feel comfortable with the heat and humidity of April as it was still the dry season and the starting of the rainy season. The heat was around 33C but humidity was over 90% and Dee and I were feeling it very badly, how would Reen cope with this we wondered!!

Anyway, she was ok with the climate and it actually cooled off a bit after she arrived. She enjoyed her holiday, and as promised, the first run was to the Elephant orphanage at Pinnawela where she had the time of her life. She fed a baby elephant his afternoon meal of milk and a big girl who was pregnant a meal of fruits. She also got a chance to take a few shots with the mighty guys and see them splash around in a mostly dried up river due to the ongoing drought. I think she enjoyed her day and wants to come back to feed them again.

Cooling off in an almost dried up river 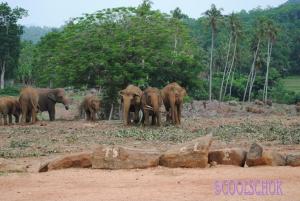 The pack at Play-“Let’s go Camping”

We also drove up to Kandy (the last Kingdom of Sri Lanka), Nuwara Eliya to see the hill country and the lovely tea estates, and took her to the Indian Ocean and the lovely beach at Mount Lavinia for a wonderful evening and a glorious sunset. A drive down to Unawatuna and Galle was nice but that was where all the unexpected started to happen. 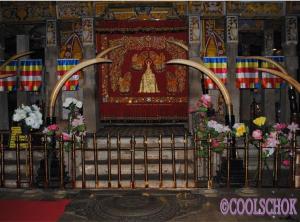 Kandy Temple – The most sacred place 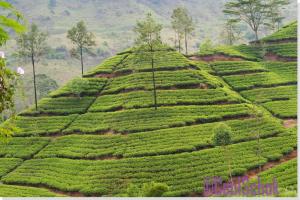 Refreshing to the eyes,wonderful Tea. 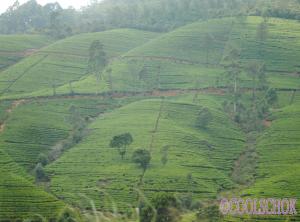 Misty hills with Tea as far as you can see. 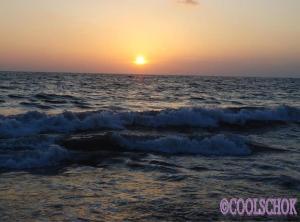 Sunsets as glorious as it ever could be at Mount Lavinia beach.

Yes, that’s right, the unexpected and the never expected did happen to Dee and then to me. On the way back from Galle, Dee mentioned that she was not feeling too well and that she felt body pains. We thought that it was due to the running about we had been doing and that she was feeling too tired.

But that’s not what happened; once we returned home……..Dee came down with high fever 104F and was shivering like a leaf in a high storm. I gave her some medications and thought all will be ok by morning. But things became worse the fever never went down and she was quite restless during the night. As soon as it was morning and the neighborhood doctor was available we went to him and he gave her some immediate medication to bring down the fever and was a bit suspicious that it might be Dengue the dreaded fever that the mosquitoes bring that could be fatal if not treated under medical supervision. She had a blood test and within an hour he confirmed that it was Dengue Fever and requested that she be admitted to a hospital as soon as possible.

Dee was rushed to the hospital and admitted. She was placed under doctors supervision and given Paracetamol which is the only medication used to treat the fever. There is no medication given directly to fight the Dengue virus, but re-hydration is given in the form of saline and a mild antibiotic with paracetamol to keep the fever down.  According to the type of Dengue virus the symptoms are different and could be mild or life threatening.The blood platelets keep dropping and is monitored closely during the course of the peak period which is between 5 to 10 days. Body pains and rashes with high fever is very common.

Dee was having very bad body pains and a splitting headache. She was infected badly and was not able to eat anything as she was throwing up. Reen had to leave in the middle of all this drama as she had already booked her flight. She was very worried and we were also worried if she too had been bitten by the bloody mosquitoes .

After Dee had been in the hospital for about 24Hrs, I too was having fever and it was very, very high. On checking it was found to be 104F and I was rushed to the hospital and admitted. We were both down with the same stupid Dengue fever and sitting like sick ducks in hospital, The fever was really bad and I had a sudden black out and was transferred to the ICU for further observation. The observation ended 8 days later just two days after Dee was released from the hospital.

April was one of the worst months that we have ever gone through. We are still trying to get back on our feet as the blood platelets went down to 7 & 10 for Dee. The Doctors say it takes about 4 weeks to fully recover, but we feel its going to take a bit longer as we are still feeling really hammered.My hands still have signs of internal bleeding and the joint pains are still continuing. 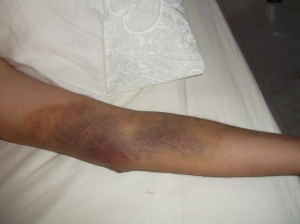 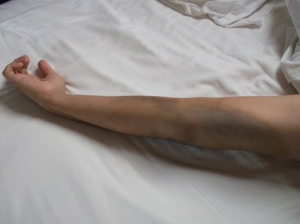 Thank God April has passed and May has come and silently taken me pass 45 in human years. I still feel 18……only if this stupid mosquito didn’t have us for dinner!

We are now on a mission to strike down any mosquito that is sighted…….cannot understand why a menace that is no use to any human or animal is not destroyed and cleaned off the face of earth once and for all.

Please keep your environment clean and don’t let this nasty mosquito take your life away. Please help destroy Dengue Fever for ever. 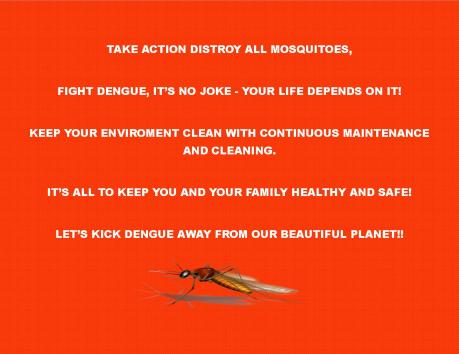 Last week was horrible in every way, and when we were hoping it would get better, a car crash made it one of the worst weeks we have had in a long time.

I have been ill with a chest infection, cold, flu and the full works for almost 3 weeks. But since I was feeling a little bit better, I was cleared to fly back from Sri Lanka to the Middle East and to get back to work. I had been away for a month for my cancer test and this infection extended it for more than 45 days .

Since returning, I was only able to get to office for one day and then came down with another round of the same chest infection. The cough just did not give up and my chest seemed to be full of stuff. I just couldn’t cope with the air conditioner and the cold air in the office, it was making me worse.

So it was once again back to hospitals and the doctors. We are getting sick of seeing doctors & hospitals, it seems like this year is just a non-stop visit to one hospital or the other.

While returning from the hospital after making an appointment to see the doctor in the evening and worried about what the evening would bring, a sudden thud shook us, a car had just brushed my car and ripped out the front wheel arch & the front bumper. 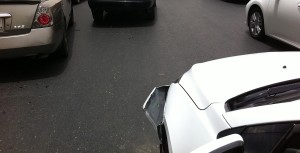 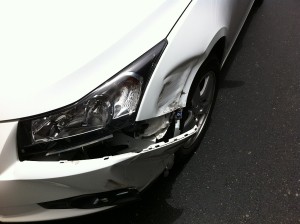 It was so frustrating, we were tired,worried and not in any mood for this sort of matter. The other driver didn’t want to wait and wanted to drive off saying he didn’t want to claim anything. I had to plead with him to stay until the cop’s got there as the insurance company would not pay unless the cop’s give me a document regarding the accident. The  cops took a good hour to get to the place where we were, and it was crazy standing there in the middle of the busy street waiting for them. Over here in the Middle East you cannot repair your car unless you have a document from the cop’s stating that they have no objection to the repair. The whole process of the accident and the Police station, took over 4 hours to be completed and the matter to be re-solved. The worse was the heat, it was a day when the heat was around 50C and Dee spent 4 hours sitting in the car until this drama ended. In this part of the Middle East, Women, normally do not go to traffic police stations. It is considered a place for males only, Women are not permitted to drive over here. By the time we finished with this dance and came home we were looking more like fried fish than human.

The evening appointment was not too bad, the doctor was great and recommended that I take Blood Tests, X-rays and a chest function test. We will know whats making me ill once the reports are out in a few days.

Finally, the sunset without anymore drama on this very long & hard day. We kept hoping for nothing more to happen in this horrible week. 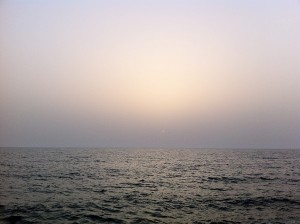 I keep wondering, Why does Murphy’s Law  have to be so correct when it says “If something has to go wrong, it will“. Why does he have to always win?? Grrrrr

Recently, I watched a video on Ted.com (http://www.ted.com/talks/lang/en/anthony_atala_printing_a_human_kidney.html)  about the amazing advances that biotechnology had made and how it would be helping many patients who are indefinitely waiting for organ transplants of many types in the future.

I was happy listening to Dr.Atala’s short but very educative talk and was amazed by the use of technology that could build a human organ from scratch using a special printer and cells in place of ink. This great use of technology and will be a life saver. There are so many wonderful people out there who had to just give up living and pass-on as they could not find an organ for a transplant as the number of donors for any type of organs is so limited and the demand is so large. Many people ruin their health by abuse and neglect, but there are so many others that just catch an illness and need an organ transplant to keep living. These people are the individuals who feel the worst when they know they did nothing to destroy their bodies and medically no quick fix solution is available to put them right again. It may take a few more years before these types of transplants could be commonly used, but it gives hope and that’s great news to patients and to the medical staff who try so hard day after day to save lives.

I strongly feel that this type of remarkable information should be shared as breaking news and be the headlines of all media so that citizens of the world would know about it.  It would be so helpful to many patients giving them hope of a recovery and helping them stay motivated. Everyone knows someone who is either ill or even someone who is caring for an ill relative, friend, neighbour or co-worker. Sharing the message that in the future there would not be a shortage of organs for transplant, will be a light at the end of a very dark tunnel.

Thank’s for your Footprints