A SriLankan Airlines Aircraft being prepared for the next flight at BIA, Sri Lanka – August 2016

One of Sri Lanka’s busy railway routes is the South bound service that links the capital Colombo with the Southern cities mainly Galle & Matara. This journey could take from 3 to 6 hours from one end to the other, depending if it’s the Inter-City train or the slower train.

This route run’s mostly parallel to the ocean and the views you get are just stunning. In the morning, you will see a calm sea that’s just so inviting. If you are traveling from down South to Colombo, you could see the fishing nets being pulled in and the days catch on the beach. The occasional jogger or those who take a morning walk might just stop in their footsteps and wave at the passing train or just keep looking on in fascination. In the evening, its nothing but the sunset with all its glory & colour that will enchant you as you go home after a long day at the office.

Sunsets as glorious as it ever could be at Mt. Lavinia

It’s one of those train journey’s I always enjoyed taking when I used to travel to office by train in the late 80’s. The breeze from the ocean always cools you while you travel, even when the train is full with everyone going to work or going home after a busy day, it’s still a lot of fun as you are so close to the beach and the smell of sea spray hits your face.

It’s a good route to take as a  lazy ride on a weekend or if you want to go down South with family or friends to have some fun on a slow train.

Unfortunately, due to its close proximity to the ocean, when the tsunami struck in 2004, it took the life of many of those who were on the trains at the time. The tracks took a while to be reconstructed and the service was resumed with warning systems placed for immediate action if a tsunami may strike again.

I am no expert on trains and always enjoyed riding and watching them go by, like these that passed while the sun was setting at Mount Lavinia recently;

Class S11 doing the after office run towards Colombo.

Riding the foot board – enjoying the view of the setting sun.

S11’s coupled together, the long train. 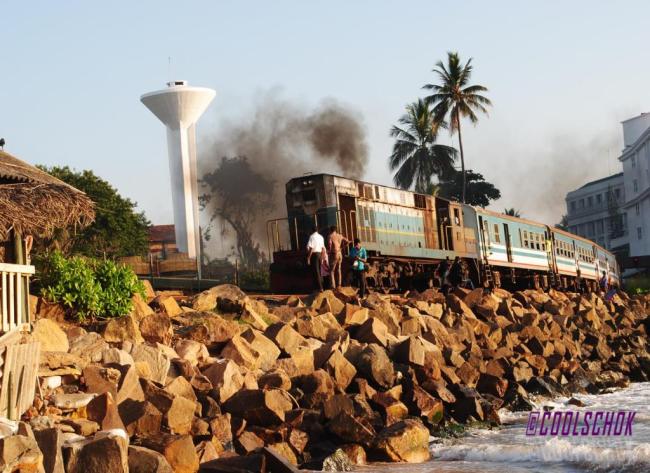 An old Class M4 – Coughing a cloud of smoke, but Still in service.

Thank’s for your Footprints